This world class uranium project is being developed in an historic mining area about three hours west of Madrid, Spain.

The Salamanca Project is located west of Salamanca province, an area with a long mining tradition.

This initiative will guarantee Spain and the European Union an internal supplier, delivering more than four million pounds of uranium a year, equivalent to the 10% of European total consumption or more than a third of the energy generated in Spain.

Berkeley selected as the winner of the Outstanding Contribution to Sustainable Mining – Europe category in the 2020 Capital Finance International (“CFI.co”) Sustainability Awards. 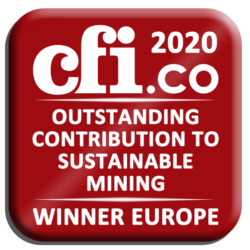